Zach Cecil’s heart raced as he approached the cliff he fell from in April. Hiking with two of his friends, the North Idaho resident lost his footing on a high ledge in Post Falls’ Q’emiln Park. Here’s his story.

Was this the first time you’d been to the park?

I’ve been coming to Q’emiln forever. I do a lot of hiking and walking. I love to hike around Bend and Mount Hood—it’s just gorgeous.

So how’d it happen?

My buddies and I were trying to come down a trail. I was behind them, the very last guy going down the trail, and I lost my footing on the wet moss—it had just rained. I grabbed a branch on my way down and it got stuck in my arm. I though I was good for half a second, and then no.

As soon as the branch gave way, I just remember I had accidentally kicked off and pushed myself away from the edge. It was a straight fall.

I remember looking down, and I had time to think ‘this is it.’

But I was pissed because I always always told myself if I was going to go out, I was going to say something, but I hit the ground and it knocked the wind out of me. I landed right next to a slab of rock. That would’ve messed me up a bit!

The backpack I had on flew up and completely protected my entire neck and head. It’s funny because my buddies and I kept trading it back and forth all day.

What happened after you hit the ground?

When did you realize you weren’t paralyzed from the fall?

It took me about a minute to get my breath back, but as soon as I could wiggle my legs and I could feel my ankle throbbing, it was a good think. For three days, I was wiggling my toes constantly reminding me that I [wasn’t paralyzed].

How long did it take for your friends to come down?

I swear, they got down there quicker than I fell. Dustin was right there at my head, and he’s an Eagle scout, so he’s holding my head telling me to quit moving because I was trying to move everything around, doing a whole body check.

My back just felt like a huge cramp. I’d never broke anything before, and my ankle was just throbbing.

There were a couple kids right down the way and they heard my buddies call for help and to call 911. The police showed up first. I think it was a total of 35 to 40 minutes from the time I fell to the time I was in the ambulance. They were down there super quick with six or seven guys.

How long did you stay in hospital?

I spent eight days in KMC. Two days after the fall I had surgery. They got me in there, flipped me over and split my back open. I got eight screws and two rods. My ankle also had a hairline fracture.

So I had one 7-hour surgery. I burst fractured my L4, which required eight titanium screws and two titanium rods.

What type of physical therapy have you undergone?

I’ll be going until March, which is almost a full year. It’s not bad—it’s definitely still painful because the muscles are still tense.

When I fell, I was 184 lbs. and by the time I got out of rehab 30 days later, I was 148 lbs. I was not eating and those prescription drugs are awful. I lost a bunch of muscle mass and I’m finally getting it all back. 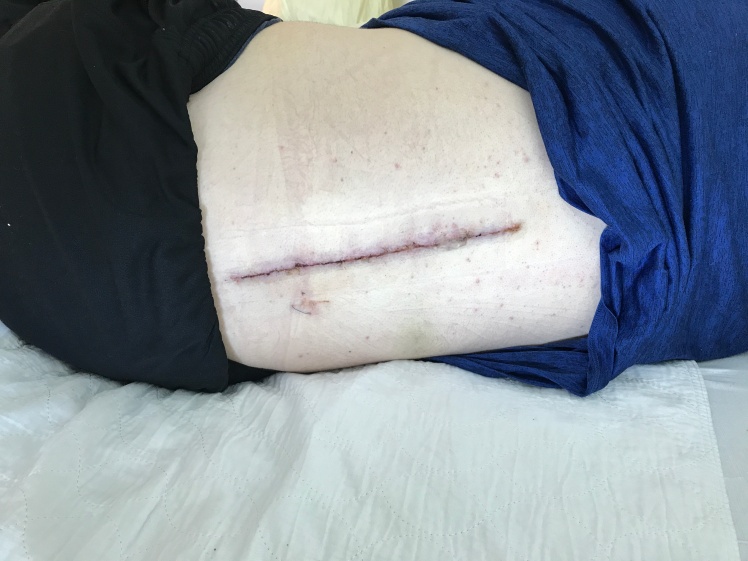 Did anything good come out of the accident?

The day after my surgery, the neurosurgeon came in and said “Good news! Successful surgery and we also fixed your scoliosis.” I was like, “what are you talking about I don’t have scoliosis.”  Apparently, if I had not fallen, I would have had the same surgery 10 years from now to fix whatever scoliosis I had.

And I’m also almost an inch taller than I was.

It totally changed my perspective on all kinds of stuff. You only live once. I had a lot of time to think in the hospital, I was just laying there watching “It’s Always Sunny in Philadelphia” and being alone and thinking.

I decided I was not going to be a bitter person. I wanted to be positive and keep doing what I want to do, just keep hiking.

I haven’t come back to Q’emiln out of respect for my mom because it threw her for a loop.

Does she know you came out today?

Yeah, I told her. She’s like “You’re not going to the top are you?” It’s actually kind of cool to come back.

Are you more scared of heights now?

I love flying airplanes and I’m in the process of getting my private pilots license. I’m not an adrenaline junkie. I like outdoorsy stuff, but in a safe manor.

How often do you think about the fall?

I had nightmares for a month in the hospital, but then I started thinking positive about it and it seemed to help.

How was it to have your friends’ support through all this?

I definitely got through some of tough stuff because of my friends. Two of them visited me basically every day when I was at the hospital.